Samia® Italia Srl designs static and mobile fuel gas skid, nitrogen skid, and fuel gas reduction systems based on customer specifications for purging and sealing. The unit might have one or more pieces of equipment to filter, warm up, and reduce in pressure of the fuel gas. If required, the unit might be provided with measuring and/or buffering systems. Each component is designed and sized accordingly to the customer’s needs, to optimize the processing unit. 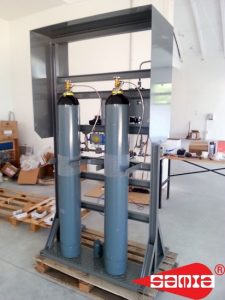 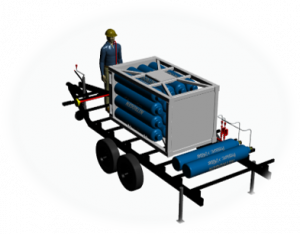 Purging refers to the introduction of inert purge gas into a system to prevent the formation of an ignitable environment. Purging relies on the principle that a combustible gas can undergo combustion (or explosion) as long as mixed with air in the right proportions. The flammability limits of the gas define those proportions, for instance, the ignitable range.

What is Nitrogen purging?

Nitrogen has many applications and depending on the industry, it can be used for a wide variety of processes. A colorless and odorless gas, this element makes up around 78 percent of the air.

While usually associated with the air, industrially produced nitrogen is used in several applications. From the brewing industry to the petrochemical industry and oil and gas industry, all taking advantage of Nitrogen. In case any of your equipment needs regular purging, here is what you need to know about the various methods and processes.

Nitrogen purging is industry-standard technique is the act of displacing any undesirable or hazardous environment with inert nitrogen. In case you work in an industry where the contamination of hazardous gases and accumulation of explosive gases is possible, then nitrogen purging is essential.

In the venting and flaring system, the purge gas is injected into the relief header at the upstream end and at the major branches to maintain a hydrocarbon-rich atmosphere in each branch, into the off-plot relief system, and into the flare stack. The gas volume typically is enough to maintain the following velocities. The oxygen concentration must not be greater than 6% at 7m inside the tip. When there is enough PSV leakage or process venting to maintain the desired backpressure, no purge gas is injected.

Why Is Nitrogen Used for Purging? 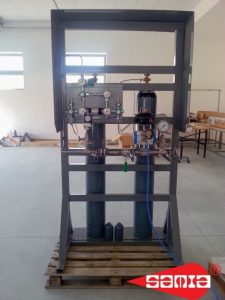 Nitrogen is dry and non-combustible, and the nitrogen displacement of combustible gases would prevent an unstable and potentially ignitable environment. The use of nitrogen in oil and gas industry equipment effectively displaces moisture and oxygen and creates a more stable environment. For example, purging the flare risers and KO Drums is a crucial safety measure to avoid internal explosions.*

*Flame arrester only protects what is upstream of it and thus does not protect the flare system. Therefore, Samia recommends using purge gas to ensure that oxygen will not enter through the flare tip.

When it comes to nitrogen purging, there are varying systems and methods, all of which require different equipment. Easily adapted, the method of nitrogen purging will depend on the equipment used (i.e., the shape and type), as well as the location of the purging outlets and inlets.

The four main methods of nitrogen purging are:

Sometimes, it might be needed to transfer liquids without using a pump. To do this, nitrogen will allow you to pressurize the space within the vessel. This is most often used when there are space constraints or if there are certain materials that influence the pump.

By using this method, you will be able to considerably reduce the risk of oxidation, which frequently happens while transferring liquid from one vessel to another.

When “sweeping action” of nitrogen is not possible, a vessel can be pressurized using nitrogen. Once the contents of the vessel are mixed with nitrogen, dilution happens. The mixture is then vented, and the process is repeated. The amount of nitrogen needed in this case will depend on the number of pressurized purges required to reduce the contaminant until it reaches a suitable level. This method is ideal when a vessel only has one opening.

When equipment has direct cross-sections, such as those found in pipelines, this method is ideal. In most cases, a scraping piston, known as a “pig” is propelled by the pressure of nitrogen. As the pig pushes through the line, it effectively purges the contents. The amount of nitrogen required is based on the volume of the pipe. Unlike the other methods, such as dilution purging, you can purge a system without considerable mixing. Although mechanical pig launchers and receivers are mostly used.

This option is ideal for complex systems and equipment cross-sections which include columns, reactors, etc. By mixing nitrogen with the gas, you need to purge, contents can then be effectively purged through an outlet point, which should be as far away from the inlet point as possible.

The most important consideration is the location of both the entry and exit points. By diluting and displacing the contents in question, this method results in a more inert environment.

Consider a semi-closed or closed system, initially containing air, which should be prepared for safe introduction of a flammable gas, for example for start-up procedure. The system can be flushed with an inert gas to reduce the concentration of oxygen so that when the flammable gas is introduced into the system, an ignitable mixture can be avoided. In NFPA 56, this is known as purge-into-service. In combustion engineering, the introduction of inert gas dilutes the oxygen below the Lower flammability limit (LFL).

Consider a semi-closed or closed system containing a flammable gas, which shall be prepared for safe introduction of air, for example for the shut-down procedure. The system can be flushed with an inert gas to reduce the concentration of the flammable gas thus that when air is introduced, an ignitable mixture can be avoided. In NFPA 56 this is known as purge-out-of-service.

How does the Nitrogen Purging procedure work?

The goal of any nitrogen purging system is to “cleanse” pipes and other equipment that contain contaminants. By doing so, you will considerably reduce any risk related to hazardous elements, including oxygen. Depending on the method used, nitrogen may circulate at either high or low pressures. The specific nitrogen displacement procedure used will depend on many factors, nevertheless, regardless of the method used, you will need a steady flow of nitrogen.

Samia offers custom nitrogen systems, a wide range of parts, and a variety of services. If you would like to discuss the process of nitrogen purging, please do not hesitate to contact us.